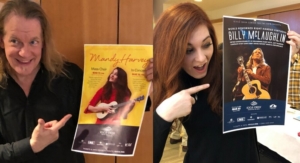 Mandy Harvey is an American jazz and pop singer and songwriter. Profoundly deaf following an illness at the age of 18, she is most popularly as a former contestant in the 12th season of America’s Got Talent, where she performed original songs during the competition.  She was the “Golden Buzzer” from Simon Cowell and eventually placed 4th in the competition.

After losing her hearing at the age of 18, due to illness, she eventually re-trained herself to with the use of “visual tuners” and continued her career as a performer.  She has gone on to record several albums and to appear at the Kennedy Center.  She also serves as ambassador for No Barriers – an organization that helps people with disabilities overcome obstacles.

Billy McLaughlin is recognized as an innovative performer and composer who embraces the advantages of acoustic guitar amplification, unorthodox techniques and altered tunings while celebrating a gift for melody. His enormous yet fluid acoustic guitar tone has carried him around the world, to Billboard’s Top-Ten Chart and most recently through a devastating medical disorder called focal dystonia. McLaughlin has had to re-learn the guitar left-handed and is in the early stages of what might be described as ‘one of the great musical-comeback stories of all time.” His story is the subject of an award-winning documentary film called Changing Keys – Billy McLaughlin and the Mysteries of Dystonia.