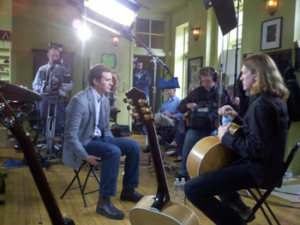 CBS producer Bob Kozberg from the Los Angeles office filmed and interviewed Billy and members of the audience at a recent concert in La Jolla, CA. Early Show anchorman Jeff Glor then flew to Minneapolis from New York to interview Billy one on one about a week later. The story will be airing nationally and focuses on overcoming adversity and Billy’s determination to regain his music and improve awareness of dystonia. As soon as CBS sets a date for airing the story we will post it on Billy’s homepage and send out an e-blast notification. Thank you CBS and especially Bob and Jeff for their part in getting Billy’s story out for the first time on network television!

While out in San Diego playing at the Neurosciences Institute Auditorium, Billy had some great opportunities to be interviewed by a few newspapers, and CBS’ San Diego television station, to get his story out.
CBS8 San Diego – Billy McLaughlin: Life from the other side