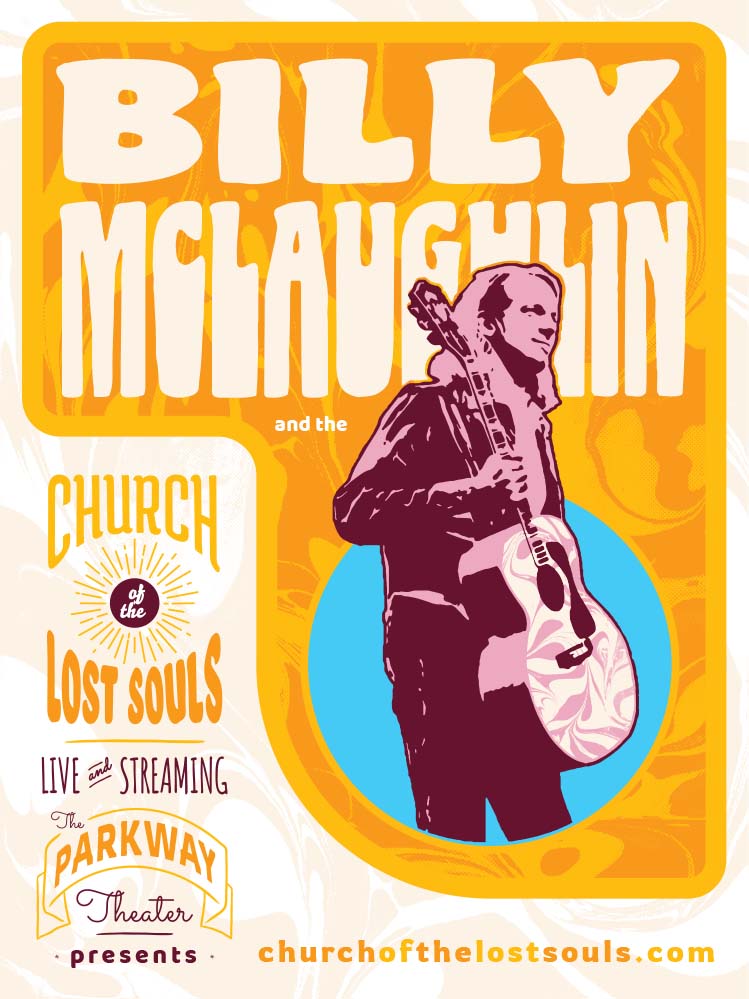 Church of the Lost Souls

“THE CHURCH OF THE LOST SOULS” LIVESTREAM CONCERT SERIES TO LAUNCH LIVE FROM THE PARKWAY THEATER ON VALENTINE’S DAY (FEBRUARY 14) — FEATURING BILLY MCLAUGHLIN, SIMPLEGIFTS AND SPECIAL GUESTS FOR 12 CONSECUTIVE WEEKS THROUGH MAY 2, 2021

MINNEAPOLIS – January 4, 2021 – It’s not really a church. And you don’t have to be lost or found to attend or tune in. But a new livestream concert series is hoping to raise spirits and share the love beginning on Valentine’s Day. The Parkway Theater presents Billy McLaughlin and “The Church of the Lost Souls,” featuring members of SimpleGifts and Special Guests for twelve consecutive Sundays, beginning at 4:30 p.m. CST, February 14 through May 2, 2021.

A livestream performance every week – with socially distanced in-house ticketed seating available when allowed by Minnesota state guidelines – will hopefully fill the musical void left by previous weekly shows on the air and in the clubs emanating from the Twin Cities. Reminiscent of Chris Thiele’s “Live from Here” (the successor to the long-running “A Prairie Home Companion”), the Fine Line’s redoubtable Sunday “Gospel Brunch” and The Aster Café’s Bluegrass Sundays are now entertainment artifacts temporary lost to the past. But The new “Church of the Lost Souls” hopes to make believers again out of those who love a wide range of live music every week with well known local artists, national names and perhaps even a few surprises.

“As a kid, my first chance to play guitar was Sundays at my church. Problem was, the music director kept telling us the songs we really wanted to play were not allowed,” notes McLaughlin who will co-curate the weekly slate of guests and music with The Parkway’s Jessica Paxton. “After all these years I thought it would be fun to share whatever feels right that could send people into Mondays with a good feeling!”

McLaughlin envisions the new Lost Souls format as “a weekly musical revue, filled with both songs of joy and introspection, in a living room-listening environment suited for all kinds of music, artists, and listeners.” The “message” is the music, ranging from McLaughlin’s expansive catalog of original guitar and vocal compositions dating back several decades to more universal fare that may include everything from Neil Young, Joni Mitchell, Bob Marley, and The Beatles to Sly and the Family Stone and many others from the contemporary music scene.

Watch for advance announcements about new shows and added special guests 2-3 weeks in advance as The Church of the Lost Souls takes flight!