The Parkway Theater presents Billy McLaughlin and The Church of the Lost Souls featuring members of SimpleGifts and special guests – twelve consecutive Sundays, 4:30pm, February 14 through

Livestream viewing needs no ticket or reservation – we use a “pay-what-you-can” donation approach. Donate here!

Laura MacKenzie has learned from many tradition bearers on both sides of the Atlantic, and has herself been recognized as a Master Folk Artist (Minnesota State Arts Board). She has been lauded as a “Celtic music wizard” by the Minneapolis Star Tribune and a “High priestess of Celtic music” by Minnesota Public Radio.

In 2014, the City of St Paul declared “Laura MacKenzie Day” by official proclamation for Laura’s contributions to traditional music in Minnesota.  Among other notables, Laura has performed in extended productions with Frank McCourt (Pulitzer prize winning author of Angela’s Ashes), T.R. Knight (of Grey’s Anatomy, on stage at the Guthrie Theater) and Katie McMahon (of Riverdance). She also performs and records with Dáithí Sproule (of Altan), and with Billy McLaughlin. 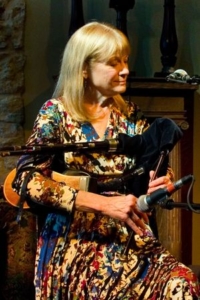 As a player and producer, MacKenzie is often engaged for live shows and studio projects, and can be heard on numerous recordings and several documentaries. One of her studio productions sold over 580,000 copies. Laura both produced and performed in the popular and festive “Charladies Christmas” and “Gaelfest!” shows.  In performance, Laura currently appears as a solo artist, in duos with Dáithí Sproule, Gary Rue, Ross Sutter, in Willow Brae with harpist Andrea Stern, in the ensembles Laura MacKenzie and the Lads, The Frothy Band, Brass Lassie, and in SimpleGifts with Billy McLaughlin. Laura’s powerful array of wind instruments includes wooden flutes, many whistles, concertina, Scottish smallpipes, Border pipes, French Cornemuse, Spanish Gaita, Medieval English Greatpipes, Leicester smallpipes, gemshorn and voice.

What is Church of the Lost Souls?

It’s not really a church. And you don’t have to be lost or found to attend or tune in. But a new livestream concert series hopes to raise spirits and share the love beginning on Valentine’s Day. The Parkway Theater presents Billy McLaughlin and “The Church of the Lost Souls,” featuring members of SimpleGifts (versatile singers Kathleen Johnson, Karen Paurus, Amy Courts, Celtic multi-instrumentalist instrumentalist Laura MacKenzie) and cool Special Guests for 12 consecutive Sundays, beginning at 4:30 p.m. CST, February 14 through May 2, 2021. Special guests will play a 15-minute set mid-concert followed by closing numbers by Billy and the band. For more information on this new project and performances, click here!